I feel like I’m 23 and on summer break from life.

That’s the beauty of a road trip!

I’m 47 and on a short, very short, vacation from work.

We’re going to drive through a couple of states.  Check out some mountains and rolling country side on our way to Tennessee.  We’re going to bike and watch a dancer stun the country as she wins nationals.  I might find a nice little place to try some local cuisine.   Who knows…..

Good sign!  We just drove over a bike trail.  I know it’s there.  Husband told me to try and get a picture of it.   Uhm…he was joking but here’s the picture from 200 feet up going 65 MPH. 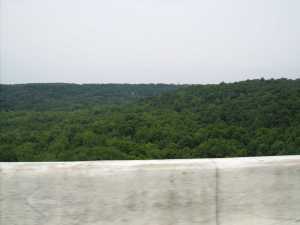 So far we’ve passed about fifteen rolling houses pulling cars behind them.   I think those folks pretty much live on the road.   There has got to be some kind of joy in that.   Get up and be tired of where you are so you roll out of bed, drop in the driver’s seat and drive to someplace else to explore and meet new people.

Man wouldn’t that be a great way to live? 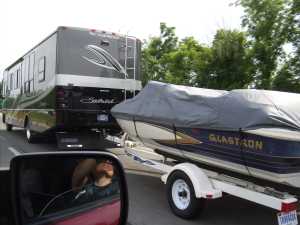 This guy had to be different and bring along a boat.

I like home but what if home was on wheels and you got to go all over the country and see whatever you want to see?  What if every few months you went to someplace with a different dialect and stayed long enough until you started to sound like them.   Then you leave and go to the next dialect.   Start all over again.    And fall in love with the different ear candy each dialect offers.  Getting to know people who were just starting to think “I like that person I hope they stay”.    All the while you’re thinking “it’s hard to leave such good people”.

I think it would be great if we all got to spend a year or two of our lives driving around this country getting to know more about us/U.S.

Oh my there are “staties” every where.   Personally, since I abhor people who drink and drive, or drive like total idiots no matter what I hope the staties get all of them.   Throw in a holiday weekend and the stupid get ….more dangerous.   Go get ‘em staties!

Oh there’s an “FJ”.   I like those things.   Mostly because it reminds me of an old friend.   Funny story, if you really want to know it, ask me and I’ll tell you about it.

Ah….nothing like idiot drivers to remind me that Husband does indeed cuss.

One nice thing about being a little OCD and taking a road trip and having jobs that need done…. It gave Husband the brilliant idea of “hey! While I’m driving you can fill the new photo albums”.   Ooooooo.   Fun.  I am now sitting in the back of the car with thirty plus year old mismatched photo albums.   I get the oh so fun job of putting the old photos in to new and matching photo albums.  I’ll get back to you as soon as this bores me again.  I’ve already emptied three.  Still have room in the first of the new albums. 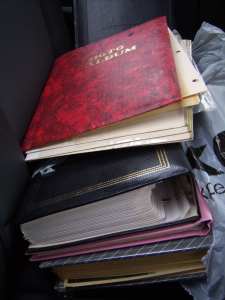 You didn’t think I was kidding did you?

An interesting point of traveling with Husband:   he ALWAYS, without fail, manages to pick the ONE out of FIVE MILLION exits that has an outhouse for a woman’s toilet.  The outhouse for women is usually tilting precariously, there’s a line with twenty three women impatiently waiting, or, it’s out of order.  Meanwhile he goes to the lush executive men’s bathroom that is always empty, clean and has an attendant standing outside to open the door so he doesn’t have to touch the door handle. 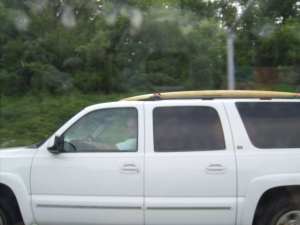 Back to Husband’s traveling agenda….

Not to mention he will pass every single exit that has 17 food options available to find the one exit with a pit stop that offers dusty bags of chips and candy bars that you know if you open them they will be moldy.   Or dark chocolate that has sat there for so long the chocolate is bleached white.

However, the greatest thing about driving with Husband is he hates my  driving.  So I can do this: 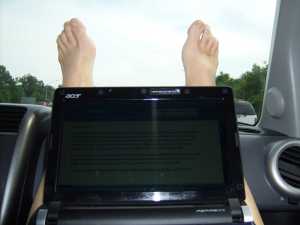 Which of course allows me to ramble on in a blog that I have hours to write.  Luxury.  For me.   Not so much for you.

I’ve also decided that I do not care to be disconnected from the world of technology.   I need to get one of those card things that allows me to be connected even as I travel.   Don’t mock me because I don’t know what the card thing is called.   At least I know they exist.   And I should probably have one.

We are in Tennessee.   The wax museum is closed due to floods.   But the Dukes of Hazard Museum is open and free admission!