Taking advantage of the hot and sunny weather Husband and I head outta town today.

No word from the kids or others requesting visits or help or our time.   So away we went.   Powered by green smoothies, bagels and protein bars we hit the trail.

Until the pavement stopped. 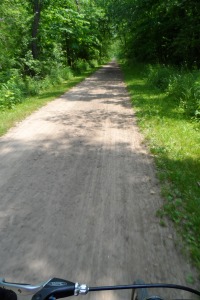 It’s been a while since I’ve ridden in dirt.  But dirt we did ride in.   It was dry and dusty.  No rain recently has left the dust on the road about three inches thick in places.   No worries.  Just more dust to kick up behind us.

When the pavement ends it is still a “road”.  But  a road shared by the Amish with their horses and buggies.  At one point I passed some Bud Light cans crushed and thrown on the trail.   I wondered what the Amish thought of that.

We had ridden this trail many times.  We road 14 miles of pavement to get to the unpaved part.  Sure, we could of driven our car to the end of the trail where the pavement ends.  But the way I see it, the shorter the distance you drive the car the longer the distance you ride the bike.

I knew what was coming…. 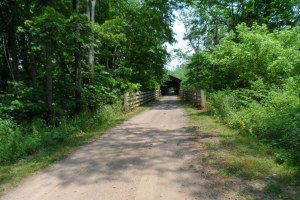 Do you see it?

It’s called the Bridge of Dreams

Years ago Husband and I had ridden this trail for the first time.   How excited were we when we came upon this unmarked and apparently unknown of bridge.   I thought we had discovered some ancient bridge.    I would like to still believe that.   Though it has signs and markings on it to say other wise now, the first time we saw it, it did not.

Notice the rubber matting for the buggies.

I was hoping to come across the Amish, and maybe find some who would talk to us.  I did race an Amish buggy once, and won.   That young Amish man was very pleasant.

Husband decided to do a little off roading…. 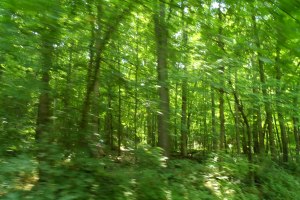 Where’s Husband? Do you see him?

No worries.   He wasn’t really off roading on private property or anything.   He was on a parallel dirt road.   One for cars.

We did, however, find a bit of a valley.   I stopped to take pictures and was surprised when we road over to it that there was a drop with what looked like an ATV climb.

Off roading…. for real? 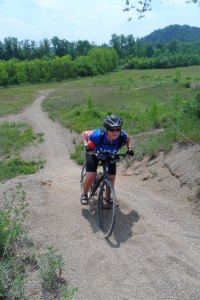 Though this picture is deceiving, and totally staged, it doesn’t accurately depict the steepness of the hill behind me.   Or the fact that as soon as we set my bike in the pea gravel it sunk in 4 inches.   No fatties for me to ride.   But I didn’t mind pretending.

The dirt was enough for us today.   Hills will have to wait.

We returned to the dirt road riding.  When up ahead a buggy approached us.   I had no intention of taking a picture of them, I respect their beliefs.  Though I was hoping to get a picture of the back of the buggy.   And I did.   These folks were obviously returning from church services.  The young mother and father in the buggy said hello to me but did not indicate they were willing to  slow down to talk.  I felt bad for Amish Momma who was holding a young baby, she looked pretty hot.   This is them returning home… 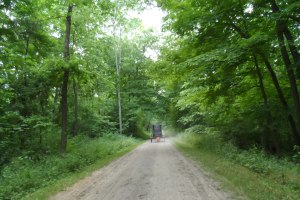 And then I see a couple of more buggies.  I thought for sure they must have been more families returning home.   I was pulling up behind this one going in the same direction I was. 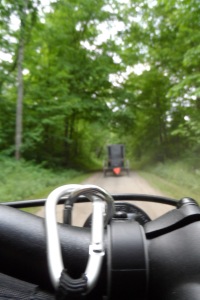 They were right in the middle of the shared trail.  I had to slowly make my way past their very slow moving buggy.  I have read quite a bit about the Amish and know about the Amish Rumspringa.  But I was still surprised as I pulled up along side the Amish buggy, on the left, and there was a young man’s left hand holding a cigarette.  And music was blaring from the buggy.  I tried to make myself heard over the music and buggy noise to say I was approaching.  But they didn’t hear me.  And as I pulled along side, there was the young Amish man smoking, shirtless, and drinking a Bud Light of the kind I saw crushed on the road just up ahead of the direction I was returning to.   Normally I’ll speak to anyone on the trail.  But something told me not to speak to him.   And as I pulled past on my bike, I  knew Husband wasn’t far behind.   I could hear the Amish boy yell something at Husband but neither of us knew what he said, and he didn’t sound very pleasant.   So we kept going.    Up ahead there was yet another buggy, this one coming towards me.  The young man didn’t have an obvious cigarette, beer or blaring music.  And he smiled kindly and spoke to me as I rode by.   People who were attending a “mud run” were coming from the adjacent field speaking to him.  I kept going.

I was kind of disappointed.  I would have enjoyed talking to someone I didn’t know.   Sharing pleasantries and maybe exchanging a moment, like when the first young Amish man I ever spoke to wanted to race me with his buggy while I was on my road bike.  Touching a bit of a different world, within my own world.

Soon enough we got back to the road and hit the pavement again.

But it was good to get off of the pavement and get a little dirty.

4 thoughts on “When The Pavement Ends”