In December I shared a short story about a veteran.  I’ll refer to him as “Our Veteran“.    I think we should feel possessive about men and women who put their lives on the line, literally, to defend us.  Once he or she has served an entire country, I think the country should be dedicated to their well being.

So many of you  have sent me messages and emails asking me how he’s doing.

He has had a rough winter.

Today when he saw me he hugged me, started to let go and hugged me again.  The last time I was there he was too sick and concerned for my well being to hug me.  Ever the gentleman.

He told me that the last time I was there, he didn’t think he was going to make it.

Today he was full of smiles.  And still incredulous that people remember “him” and his fallen soldier brothers and friends.  I took my Kindle with me so he could see the actual blog.  He was so touched by all of the comments.  He has them in print.  But to be able to pull something up that anyone in the world can see, was kind of nice for him.

I went to see him today to share with him pictures that Koji found for him, and emailed to me.  My coworker printed them up for me.  And today I took them to him.  As soon as I handed him the first picture he said “oh yes, oh my”.   And we stepped back in to another time for him.  I was so hoping that he would recognize someone.  But the pictures themselves he could name every location of, and what was going on.   His recall is sharp, his humor intact.   We went through every single picture.  And he knew them all.  He couldn’t believe Koji would go to the trouble to  find these for him.

He asked me to wait because he wanted to share something with me.

He went upstairs, with much more energy and zip, then he had on our last visit.   He  nearly ran back down the steps.  And he was carrying three items.  Two frames and one old scrapbook.

And he shared it, giving me permission to share some of it with you.

Because he is not just a soldier.

He is a son, a grandson, a father, a husband.  He’s one of us.   One of us who did something so many of his generation did.  And still, so many of ours, do today.   He sacrificed his freedom and put his life on the line.

This is the flower that greeted me at his front door. 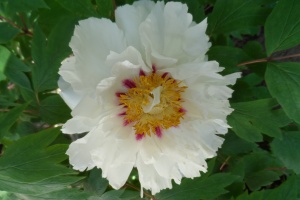 The last of his flowers.  He and his wife had a backyard full of roses.

Last year he had them all dug up.   Due to his health decline he could not manage the flowerbeds.

And another part of his treasured world is gone.

Along with his most beloved treasure.

Here they are.  So young.  So happy.  So full of everything yet to be lived.

So much joy.  So much to do together.

His grandfather and his father.  What will they think of their boy in battle?

The grandparents in their Cadillac.

Maybe not Our Hero, yet.   But her hero.

On their wedding day. 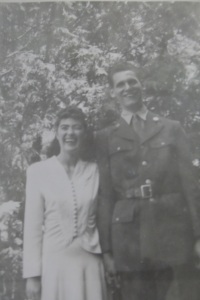 And off to training he goes.

Do they call it “hero training”?

He said this picture was after a climb, hike, trek, and training that lasted ‘forever’.

His clothes were nearly worn through, in a shambles, he said.

And either cleaning up after training.

Can you see him bobbing up out of the water?

Before the battles.  With family.

The sister and sister in law….waited.

Happily (see the smile) getting the GI hair cut.

At a time when he could.

He must have been a good soldier.

Before he was a hero.

Here he is in a training film.

Better than Hollywood could create.

Then they went to battle.

His brothers in arms.

A part of making history.

He was one of them. 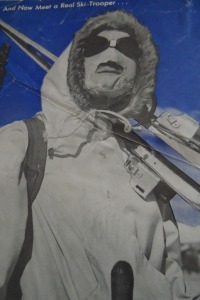 They trained for this.

Then he came home.

He noticed today, when we looked at this next picture…..

And I noticed when I looked.

Before he said a word.

He said “don’t I look like a scared kid”?  And he chuckled.

I wanted to cry.

You can’t see his scars.

They are under his eye, on the left side of his nose.

Where the bullets went in to his face.

And make it impossible for him to breath the ‘free’  air he fought for.

Look at his face.

Imagine what those eyes saw.

And when he went home…..

He got right to work.

Cleaning up his wife’s family home.

Because it needed done.

And continued doing what had to be done.

This is a corner of his front door.

This was his compensation.

He wears it with honor.

In the same uniform he wore as a soldier.

He remains a soldier.

But it doesn’t help him breathe.

This, is our reward.

Thank you, everyone, for asking about him. Praying for him.

And making him feel important and valued.

That, is his reward.

It helps him breathe.