We stopped at a convenient store.  A short break on a short road trip.  As I walked in he was standing against the outside wall.   A rolling suitcase next to him.  A bag on top of that.  He looked like he was waiting for someone.  Or, he looked like he wanted to look like he was waiting for someone.   I said hi to him, like I do to 95% of the people I pass,  as I hurried in to get to the bathroom.

When I came out of the bathroom I found my husband and we browsed through the foods we didn’t need to eat.   We ended up not getting anything.  But before we went out I saw the man still standing there.  I told my husband I wanted to know that man’s story.  I waited, hoping to talk to the store clerk.  But she was busy with others.   I thought, just go to the source.

I went outside.  He stood just as I had passed him.  I smiled.  I asked if he was okay.  He said yes.  He was waiting for a ride.  He asked me if I could take him to Walmart.  Unfortunately, my car was full, packed for the trip.  I told him I couldn’t.  But I kept talking to him.  I asked where he was from.  Because he had a different sound than what our area produces, I knew he was not native to where we stood.  He said he was born in New Jersey.  But when he was five, until sixteen, he lived “over there, when the Nazis were there”.  I looked at him without responding.  He said “I’m eighty five”.

The few teeth he had were far apart and probably didn’t work well together.   He was tan.  Of healthy weight.  He said, I thought, he has been homeless for forty years.

I asked him if he had food.  He said if I wanted to help him with that, I could.   But, he wanted to know if I cook.  I said not so much.   He asked if my husband cooked.  I said ‘not really’.  He asked if my kids cook.  I said not too much.  But, my son in law cooks.  He said “you’re son in law, he’s married to your daughter?”  I said yes.  He said I could help him with money if I let him give me a recipe.  I said that would be perfect.

I went to the car and got some money.  We seldom ever carry cash.  It was by chance, and luck, we had some with us.

When I handed the money to him he handed me a folded piece of notebook paper.  I said “this is mine?”   He said no, give it to my son in law.  I read the recipes.  He told me it’s good.  He pointed at the one and said “it will help you lose weight if you need to”.  I patted my belly and said that would be helpful.  He said the recipe would help the mechanics of ‘that’.

I got the feeling he was a little scared of me because I stopped to talk to him.  As if he may have feared what I was going to say to him.  Like “leave”, or “move on”, or “you can’t stay here”.   Maybe I’m wrong, maybe he hoped I would do more for him.  I’m not sure.   I wanted to help him if he needed help.   But the help I did offer, he wasn’t willing to accept, unless he could give me something in return.  It’s that fine line of not knowing what to do, and not knowing your own comfort level in helping someone who you aren’t sure what they want.  Or, if they want anything.

I just know while I stood there talking to him, others didn’t look at him.  Or nod.  Or smile.  Or pay any attention.

I just wanted to say hi.  Like I would anyone I pass.   Because, you know, he’s a people.  And people matter. And to interact with him for no other reason than to learn about him, felt like the right thing to do.

And as a bonus.

I got a recipe. 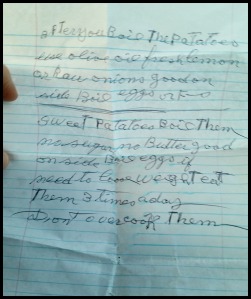