We stood on top of mountains, my friend and I.  Actual, dirt, stone, trees, wild animals and waterfalls, mountains.  The leaves were starting to have a tint of yellow underneath all of their green.  There were surprise bursts of orange in rare places, early for the season.  Some eager trees wanting to start showing off, perhaps, before the other trees outdid them.  Or is it  just people who do that?

We both feel we are introverts, my friend and I.  We were happy to be in a place that was not overrun with peoples.  I knew, for me, that part of this trip was to detox from having to talk to people.  Which I pretty much do for a living.  It takes a lot of energy to talk to people.  Every day.  About sad and difficult things.

Mountain tops have a draw for me.  The vistas, the rivers, the sounds of silence that aren’t truly silent.  It’s nature’s noise that we hear as silence because it is not filled with the trash noise of humans.  No machines- but wind, no cars- but rivers rushing and falls falling.   Just…air and water and clicking of insects.

And some people noise.  But people noise of awe and appreciation.  Sighs.  And “oh my God” that often sounded like true exclamations to a creator for what lies before us.

Though I stick with my belief I am introverted, and more comfortable not around people, I did engage with others.  My friend tells me I’m not an introvert.  I still think I am.  Even though I did have a trip full of encounters that say otherwise.  The best example of this conflicted belief of mine happened on our first day.  We found an overlook on a mountain that we had to take a short hike to.  The hike itself made one feel cocooned, safe within the walls of the trees, brush and growth.  But the trail ends, at the edge of a cliff.  It had a beautiful platform built.  While there, two young men showed up, went on the other side of the platforms and stood on the edge of the cliffs.  The actual-step another two inches and you’re a goner down 2000 feet of free falling cliffs.  My heart was sputtering, approaching afib while I watched them walk so casually to the edges and look down.  I didn’t even know these people.  In my head I was praying ‘please don’t fall please don’t fall’.  Another group of people showed up.  Three women and two men.  Happy, talking, pleasant people.  Pictures were being taken.  There were too many people there for my comfort, as pleasant as they were.  I stepped off of the platform and noticed a wee bit of trail.

I took the trail, stepped over rocks and a crevice large enough to cause someone problems if they fell into it and found myself on cliff’s edge.  But there was a large boulder between me and the cliff’s full edge.

I forgot to mention, I am terrified of heights.

My legs were trembling.  But I was happy.  I took pictures of my friend on the platform with the people behind her.  She took pictures of me.  Next thing I knew, we were all talking.  Sharing.  Laughing.  They came over to where I was.  We went back and forth.

They learned that my husband was on a biking trip with his college buddies.  My friend’s husband and child were having their first weekend with mom gone.  We learned who of their group was retired and who was still working.   One of them laughed about pictures of them with us being sent to my husband.  I had them take a picture of me and my friend with some of them.  One of the men put his arm around me.  What do you know….I put my arm around him.  I sent my husband the picture, while we were standing there.  He writes back immediately “who’s the guy you have your arm around?”   I wrote back “I don’t know.  Seriously.  No clue.”  He responds “you all look pretty chummy” with a smiley emoji.  I sent an emoji in return.

I still don’t know who those people were.  But they made us smile and laugh and happy to have met them.

And I still believe I’m an introvert.

It happened again, on other mountain peaks.  In front of a toy store as I sat in the bright red chair while my friend bought her child a toy inside.  One of the owners came out and asked me about my jeep.  I asked her to sit with me.  She did.  She had white hair with purple and pink streaks.  She called it her unicorn hair.  I called it wonderful.  We talked for some time.  And I felt like we had a new friend.

It happened again, on outlooks that laid out the world of river and trees and valleys at our feet.  My friend and I both pushed ourselves to our very limits by going out as far as we could go.  Legs trembling.  Voices cracking.  At one point I was sitting as far as I thought I could go.  I told her…I’m going further.  I slid forward on my butt.  My voice cracking and laughing and terrified.  I could hear her laughing, I turned as well as I could and realized she was videotaping me.  This will never be seen by anyone but us, and it will make us laugh.  Then, I stood up.  And I stood closer to the edge then I had ever stood before.  I think I knew true ecstasy in that moment. 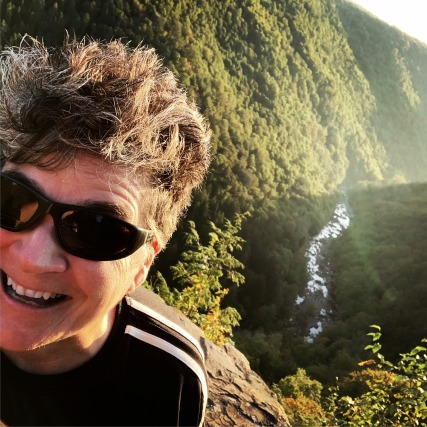 I took a moment not just for the selfie, which intensified the afib I had felt for the strangers on the other ledge, but also to write.  While I was on the edge.  And I have to say, it was pretty profound.  Truthfully, I just wanted to physically write something while I stood there.  And though the adrenaline was coursing and pulsing, my brain was a jittery mess.

On the edge.  Challenging our fears.  Pushing our own boundaries.

We took a ski lift to the top of a mountain.  We stood on the cliff where other people ran off of cliffs with their hang gliders.  On purpose.  From where we stood, I could not fathom the courage or insanity one must have to take a running leap off of the cliff.  I could, however, easily imagine the incredible feeling of flying.  I tip my imaginary hat to them and their spirit.

We went to many edges and ledges.  We didn’t necessarily get any more comfortable at stepping out onto them but we didn’t stop ourselves and turn around.  My legs never stopped trembling.  I have proven to myself that I have an incredibly strong heart for all of the palpitations I put it through. 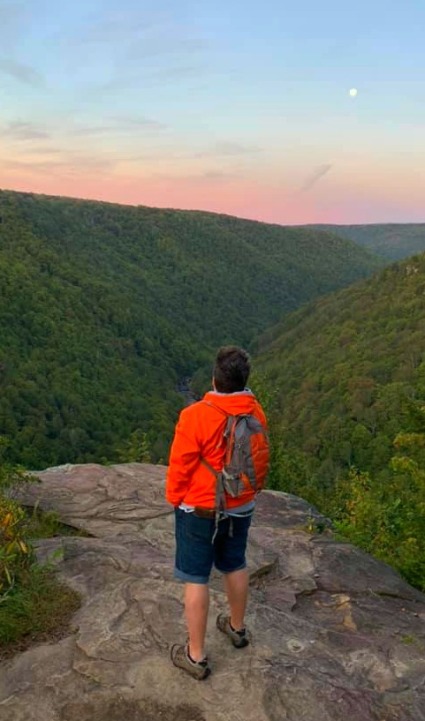 I have spent a lot of my life avoiding the edges and the ledges.  To be truthful, I probably will continue to avoid some.  But some, I will look forward to.  I will seek them out.  And I will share them.

She encourages me to be a better me.

39 thoughts on “While I Was On The Edge”

This site uses Akismet to reduce spam. Learn how your comment data is processed.