I came across this today, carved in stone:   “If I Knew Truth”.  Someone spent some time to carve that.  Someone thought it brilliant enough, important enough or thought provoking enough to carve it in stone.  If you’re going to carve something in stone I would hope it’s important, valuable, and worthy.   I wonder what the carver intended.  What the carver’s story is/was.  And if it made a difference after it was carved. 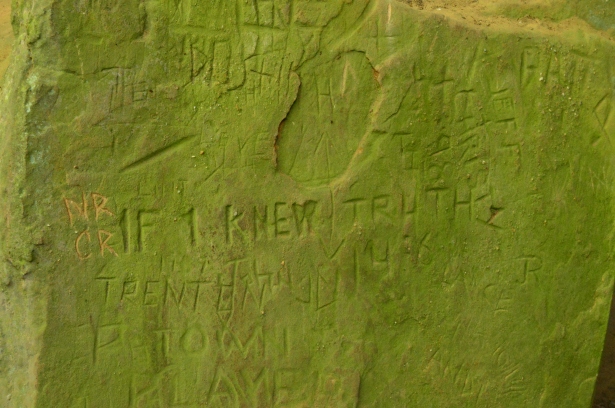 If I knew truth.

I’m not sure that I speak it as often as I should.  I know the truth as I think it is not always as I speak it.

I know I don’t  act on it as often as I should.  Or contradict it, because even in being someone else’s truth-it doesn’t mean it’s my truth.

And knowing a truth or knowing my own truth,  I suppose,  doesn’t mean I know “the” truth.

The truth of everything.

I think the more I wean trash thoughts and unneeded thoughts and actions and ‘things’ from my life the more truth I know.   It’s liberating when there is less doubt and confusion.   I notice the less I judge and condemn, the less I angst over, and the less I worry over things I cannot control-the clearer life seems to me.  Is this closer to the truth?

I know there is serious truth in knowing what you can and cannot control in life.

I know the truth of faith versus being told what to believe.     And I don’t just reference religion here.  The confidence of what you know is empowering.   I suppose carving something in stone is easier than holding fast and true to beliefs sometimes.   But when your faith is your absolute truth there is no way anyone could carve anything in to it.  So, there’s that truth.

And, if I knew the truth, maybe it wouldn’t be yours.

So maybe it doesn’t matter.

What would you carve in stone?