I remember when the house was big and we were little.

A big house.  A lot of family.   More little people than big people.

Knowing neighbors and walking to school.

Crying baby.  Laughing baby.   Big brothers and little sisters.  Baby brother.  Baby sister.  Oh God do I have to baby sit again!   Stinky diapers for years it seemed, no, for years for real.  Lots of little people added up to a big family in a big house.

Church on the weekends.  The holidays and holy days.  The smell of candle wax.  The smell of incense.  Our Father.  Saying prayers and singing choirs.

Fighting over the best chair -‘calling it’  meant it was yours even when you left to go to the bathroom.   Squeezing in around the kitchen table where there were plenty of chairs.

Mad about having to do the dishes.

Getting yelled at.   Running through the big house.  Riding bikes and roller skates.  Big wheels and little people.   Ice cream man.  The trash men.  The mail man, George – who was tall and skinny and tanned.   The newspaper boy Lawrence who was incredibly responsible.

Life was school and uniforms.  Lunch and dinner.  Sometimes dinner was breakfast, and there was nothing better than pancakes for dinner.   Breakfast meant oatmeal or cream of wheat.  Mom said to say “grace” and we all yelled “GRACE” and she never thought that funny.  Any meal was big even if the meal was plain.  Feeding lots of littles oatmeal, toast and glasses of milk can be a production.

Play was loud and meant for outside.  With footballs, kickballs, brothers, sisters and neighbors.  We got dirty and tore holes in our jeans.  There was nothing that cost much and we didn’t have much to spend it on anyway.

Pop was a treat and no one heard of eating out unless it was an enormously special occasion where kids sat quietly and meekly surprised at the specialness of sitting in a restaurant.   And being served.  And one of us being so relieved at not having to do the dishes.

Everyone in the big house would quiet down when the television screen crackled coming to life in it’s glorious green screeny kind of way.  Watching a man step on the moon.  Watching how other families lived in black and white, then how they lived on a mountain.

There was a thing called war that we only knew by playing it.  And it was over when just  one of us got tired of playing it and wandered off and the rest dropped our arms by our sides begging the wanderer to come back.  Shoulders were shrugged.   War was over.

The big house had a front door that visitors used.  Side doors that kids used.  Back door for quick access to the back yard.  Plenty of places to hide in.  But never enough room to find escape and peace.

Music lived in the big house.  It was alive with Johnny Cash, The Kingston Trio, Dead Skunks, Johnny Horton, Petula Clark, The Beatles, The Dubliners, Barry Manilow, The Mamas and The Papas, Simon and Garfunkel, Three Dog Night, Creedence Clearwater Revival, Peter, Paul and Mary, Pete Seeger, not to mention a couple hundred other musical acts.  And when dad laid down on the living room floor with the stereo blaring and his songs playing, no matter how big the house was, the house wasn’t big enough to hold in that sound or know that man of the house was laying claim to the entire house as his musical chamber for the entire day.  So you better be enjoying his music.

For awhile the big house seemed to get bigger as the family grew.   The attic turned in to “the third floor” and new residents inhabited new bedrooms.  Eventually the basement turned into “the basement” where another bedroom was inhabited and no one was fooled by the older inhabitants having easy access to that old side door that was traditionally used by little kids running in and out with dirty feet.

Suddenly it seemed like the big house stopped growing but the residents didn’t.

Years went by.  The family went by.

I went back to visit the big house a few times, long after moving out.  I was stunned at how small it appeared.  When did dimensions become so small?   When did it become so narrow?  Where was the gargantuan structure where the ceilings loomed, the doors withstood the slammings, the walls withstood our rough housing, the entire existence of it seemed to be thriving with life?

It seemed to be so quiet and forlorn.

And though I knew someone lived there.

I walked away kind of sad.

Knowing it didn’t feel like it was a big house any more either. 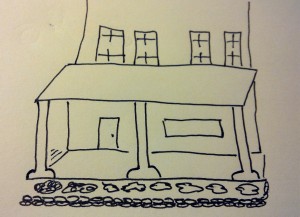