My husband turned left, following the GPS, onto a road I hadn’t been on in many years.  When he first made the turn I noticed houses that didn’t used to be there.  I took note of the changes, in the appearance and the ‘feel’.

Then he took a curve and suddenly the road was just as it had been all those years ago.  As narrow as the vehicle was wide.  With trees growing to the road, and making a canopy over parts of it.

I laughed when I told him the stories of dad driving us to church in the old Willys Jeep.  The road had gravel on it now.  Back then it was dirt.  Or mud.  Depending on the season.  We too would be covered in dirt, or mud, depending on the season.  Dad was never too worried about it.  We spent our weekends camping and if we were stinky and dirty, we went to church stinky and dirty.

I could see us.  Clearly.  Dad driving with his army fatigues hat on.  Us kids piled in, on top of one another.  Holding on to each other or jeep parts, as we bounced down the road.  There was always more of us in that jeep than that jeep was designed to hold, maybe as few as three, maybe as many as seven or eight.  There were no such things as car seats or seat belts.  If the windshield was up, it had a hand turned windshield wiper.  If it was raining we didn’t always stay dry even with the cover on.

That little jeep hauled us to praise the Lord as we prayed many a times for it to make it.  Many was the day we had to push that old jeep to get it running.  Dad could have taken another vehicle.  But I suspect if he had, I wouldn’t have remembered it as well.

The part of the road that had not changed in all these years only lasted about one mile.

Too soon, as we drove onto paved road, I sadly saw that jeep full of kids with a man in his army fatigue hat, fading away.

What a great mile that was. 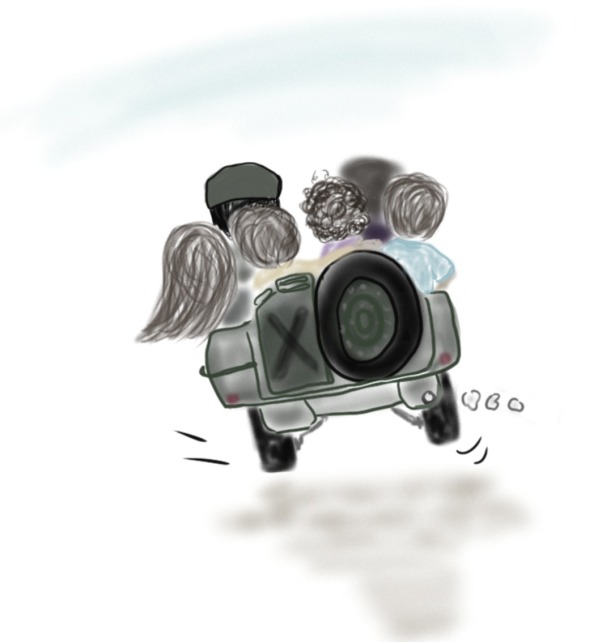