We went to the mountains of West Virginia. 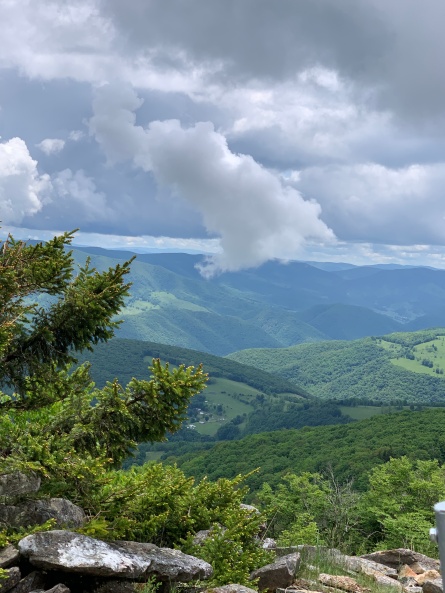 For all of the strife and discord in the world there is beauty to be found.  In places and in people. 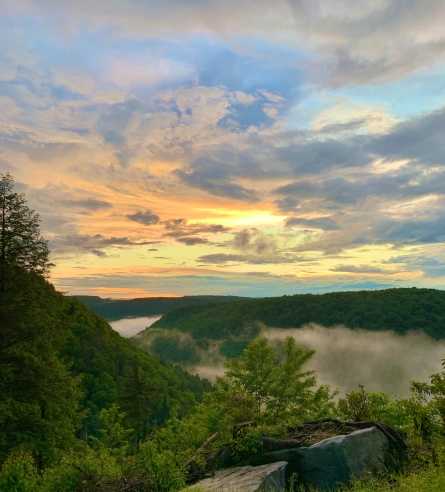 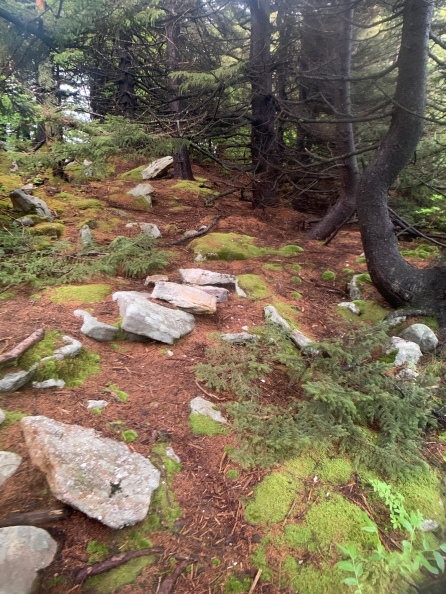 The earth displayed herself beautifully, with elegance and with strength. 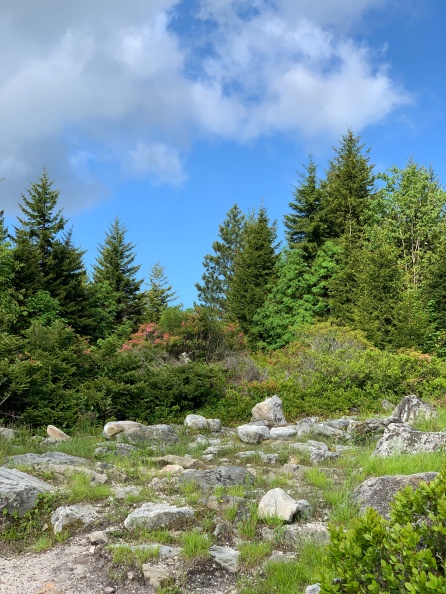 The people were friendly and eager to extend kindness and conversation.

On one excursion to a secluded small waterfall that was leading us to a larger waterfall we met Mary and Seth.  Seth had a birthday approaching.  He and his mother Mary were out for a hiking adventure.  We crossed paths at one of the smaller waterfalls and had a pleasant exchange.  Seth’s first words to us were to point out a gentler path down to the little waterfall.  The four of us shared a love for the beauty of the place and the information we each came with.  They moved on to the next step of the falls.  We took pictures where we were.  I sat down reminding myself we didn’t have to hurry.  Husband was still taking pictures.  I turned to look at him and he said not to move he was moving further down to get a picture of me.  I turned back to look ahead at the top of the next level of the falls.  I heard a noise and turned just as husband was falling and I could see his head bounce off of the hard stone base.  I was up and to him before he stopped moving.  I called his name and he didn’t answer.  After what was likely nothing more than a few seconds, or one second, he said “just wait, I’m relaxing”.  I told him to go ahead and relax but he needed to talk to me.  My heart had flown up through my throat and was still hovering outside of my body.  He remained where he was and I started to assess the situation in the faster than possible way to think and then recall all that you were thinking.  I thought of yelling for Mary and Seth, I wanted to assess him for injury, I already knew there was no cell phone service.  All the while I’m asking husband if he’s okay.  Can he move.  He opened his eyes and said yes “but my ass is all wet” because the lower half of him was laying in a small pool of water.  I could see why he fell.  He had been stepping on the smooth stone but there was a slope to the stone and he had stepped from dry to wet stone and his feet had gone right out from under him.  Here are the little falls (cascades maybe) before the fall.  He was not anywhere near this part, he was on the bank. 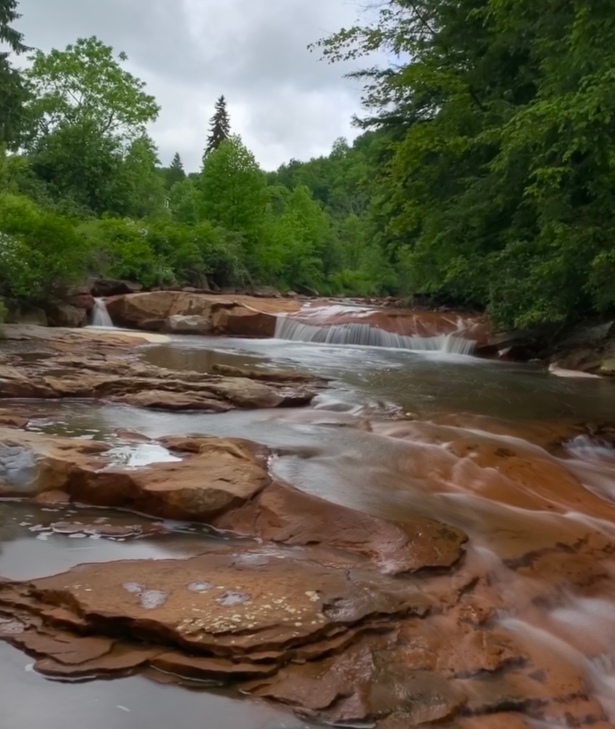 I kept asking him questions.  He answered.  But was still lying flat on his back.  I asked if anything tingled, I looked at his eyes, I asked about his back, legs, neck.  When he thought he could move I had him sit up.  He was dizzy.  I wasn’t sure how I was going to get him out of here.  Again I thought of yelling for Seth and Mary.  I knew they had to walk past us to get out because I had been here before.  I kept looking up above our heads where they would have to pass along the top of the bank.  Husband wanted out of the water but I didn’t want him standing up.  He wanted me to take his picture while he was flat on his back where he had fallen.  I refused.  (He’s still upset with me about that.)   I had him scoot back until he was out of the water.  The stone he scooted back on dropped down behind him.  When he was ready I had him pivot so he had better leverage by dropping his feet down off of that ledge and helped him stand up.

We assessed as best we could without either of us having any medical knowledge of anything.  He could move.  He wasn’t dizzy now, but lightheaded.

We got back up the bank.  I wanted to go back to the car.  He wanted to “walk it off” so we walked the path that I knew would lead to Mary and Seth.  We came upon them coming up the steep incline that led to the bottom of the tall falls we had hoped to see.  I told them what happened.  Seth made husband a walking stick (and then one for me and his mother) and they walked with us.  We walked about one to two miles.  Seth talking to husband.  Mary and I talking the entire way.   My heart was still pounding.  But their conversation and concern was comforting.  Husband said he was feeling better the more we walked.  Seth and Mary walked with us back to the car and we separated for our continued travels.  My heart full of gratitude for kind people.

Our long weekend took us over quite a few mountains and into many a valley.  At one point we stood atop the highest peak in West Virginia.  We then traveled nearly four hours to get off of that mountain.  The gps took us on every gravel road it could find to get us from the top to the bottom.   Two of those roads were no longer drive-through roads but private property we were not permitted to drive on.  So we turned around.  If you ever think or wonder if this earth is so over-developed you can’t drive for more than fifteen minutes without running into a Dollar General or a Walmart or a McDonald’s or have cell service or other amenities….I’m telling you it is very possible.  It was beautiful but there is something disconcerting about being lost and there being no one or no way to figure out where you are.  It also got to the point that I was wondering where everyone else was.  There were dozens of cars at the top of the mountain, where did they all go?  Apparently they had better gps systems.

I felt we were driving in circles, if we were coming down from the mountain why did we keep ending up on top of another mountain?  Every time the gps told us we would be turning in one mile, two miles, four miles….I would tell husband that it had better be onto a paved road.  It was not.  The only thing that salvaged the conversation was when we thought for sure we would see a bear.

We drove to Seneca Rocks.  We saw an antique store out in the country and stopped in.  An older man, Charles, was inside.  His grandfather had built the store many years ago.  He showed us pictures of the store being built.  Originally his grandfather was partners with a man and they owned and ran another store together.  But their wives had a falling out.  No more shared business.  The store has been in his family since his grandfather built it.  I believe Charles was in his 80’s if I heard him correctly, his father was a wee child when the store was built.  He showed us a picture of his grandfather and friends building the store, and his father as a very small child in the picture.  He told us about “Pat” the horse and showed us a picture of the horse with his father as a young child sitting atop his back.  Charles told us of how the store (still with original, fading and peeling, wall paper) had been a hub in a very busy place.  At 7 pm the farmers would show up and put their lanterns on the porch, come inside and gather round the radio for the news and then listen to Amos and Andy.  He remembers it well and misses that life.  The store was built with its front to the road.  But then a new highway was built that ran behind the store and bypassed the town.  Life changed.  The store was a testament to what was and why it was important.  People depended on one another and shared their lives.  The old pot belly stove the farmers used to sit around still sat in its place of honor.  Husband and Charles talked about the stories that would have been told around that stove.   It was an honor to spend some time with Charles who is emotionally connected to a time lost, that he treasures and values to this day.

One day we drove to an old fire tower.  On the way I looked down to my phone to get the camera turned on and husband said “A BEAR!”  I looked up in time to see the back end of a bear cub go into the foliage.  We pulled up to the area and I managed to get 2 shots of the cub.  Can you see him?   But I was also aware that there should be a momma bear nearby and I did not want to be between her and the cub.  The cub ran off out of site. 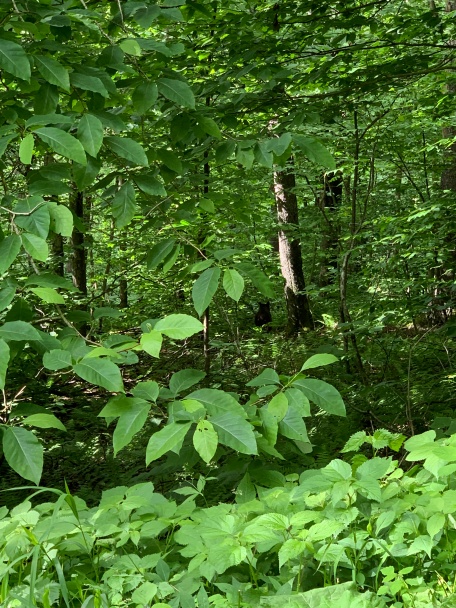 We got to the fire tower and though I am terrified of heights I was willing to give it a go.   I made it up to the first landing and had to turn back around.  Husband followed me back down.  Normally he climbs to the top of these things.  But he said something about it didn’t feel right to him.

We left.  Hoping to see another bear.

We did not.  Though many stumps and trees took on the shape of bears as we got more and more hopeful.

A little travel adventure to start the summer.  I hope everyone’s travels gives them some excitement, some new friends and some new memories.  Be safe everyone. 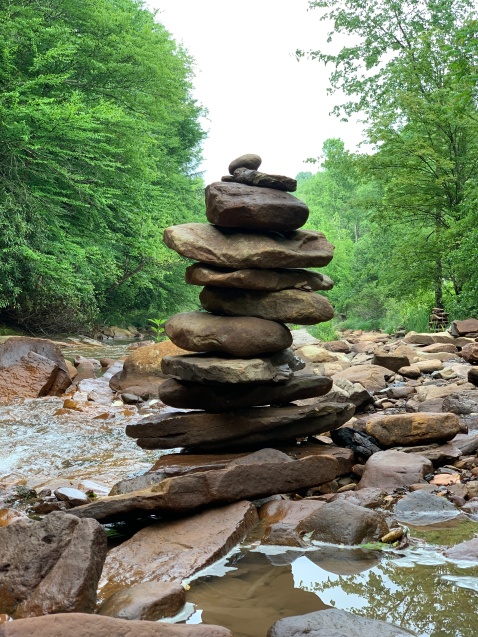 Ps…everyone was safety conscious of COVID.  Masks and social distancing were the norm.